A couple of days ago I got to tour the 3M Innovation Center. The products this company makes are truly amazing, both in the technologies involved and in the sheer number of different products. The average person in the world (yes, the entire world) interacts with 31 different 3M products each day of their lives! Do you have a cell phone with a display? 3M product. You see over 21 roadsigns each day that use 3M reflection technology. EVERY semi truck trailer in the U.S. with those red/white blocks along the bottom is 3M technology. Your car uses 3M adhesives as do most planes in the air. If you have fillings, crowns, or braces in your mouth they are very likely made by 3M. If you watched the Chilean mine rescue you saw a number of 3M products from the face masks to the coatings on the Oakley sunglasses they were wearing.

Yes, this company goes way beyond post-it notes and Scotchguard.

For the computer geeks (others can skip this paragraph) who want to measure their overclocking in multiples instead of percents, there’s a new chip cooler using 3M’s Flourinert liquid*. They can produce this liquid with just about any boiling point so the cooler is much simpler, much less expensive, smaller, and does a better job of cooling than any existing liquid cooling solution. Basically there’s a liquid container bonded to the chip, a small radiator in the top of the case with a cooling fan, and one tube connecting the two. The Flourinert boils, vabor bubbles up the tube to the radiator, cools, and falls back down the same tube as liquid. They were running an Intel Core i7 980 at 13Ghz with this little rig. It was fun to watch how much the bubbles increased as the CPU worked harder and got hotter.

One product they’re hoping to have FDA approval for later this year is a new micro-needle technology. It’s basically a half-inch round transdermal patch with anywhere from 50 to 1,500 extremely tiny needles (try 50μm in diameter for small!). The needle tips are pre-coated during manufacturing with the vaccine or other medicine. When the patch is applied to your skin these microscopic needles go just below the surface to what is known as the stratum corneum**, the meds dissolve, are absorbed by your capillaries, and conveyed throughout your body. 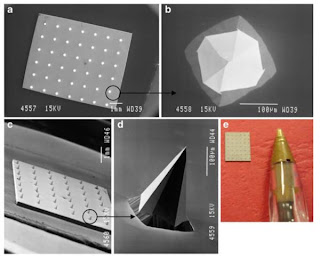 There are a number of benefits over syringes such as reduced chance of infections and other complications, higher efficacy (eg, more likely to get meds to where they need to go), and use of solid meds rather than liquid so they’ll last longer and not require refrigeration. Since micro-needles generally require less than 1/10th as much med, vaccine supplies cover about ten times as many people which will help eliminate problems such as we’ve recently seen with the scarcity of H1N1 vaccines.

This is all in addition to MUCH LESS PAIN for recipients. I hate getting shots. I’m very much looking forward to these things!

One really huge advantage to micro needles is cost savings. With a typical syringe injection only about 1/16th of the meds injected actually make it to your blood where it does any good, micro-needles deliver over 90%. This can reduce a $30 vaccine to $3. Because the solid meds are more stable and don’t require refrigeration there is also less waste (an estimated 15% of injectable meds are thrown out each year). And if they can be easily and safely self-administered there are potential savings in doctors office visits.

Now, let’s get down to brass tacks. 3M invested years and hundreds of millions of dollars developing this technology – for one reason – profits. They know, that if they are successful, privately run medical clinics will beat a path to their door. This product represents a lot of cost savings to the clinics as well as a benefit to attract new customers.

Without the profit potential, companies like 3M will not take the risks and make the investments to develop new technologies like this. Competition among medical clinics, drives competition in medical products, that drives 3M to do what it does.

If the U.S. medical care system were like the NIH in the UK, 3M and other companies would not invest in such risky new technologies. There is simply not enough of a payoff.

So, the next time you get a shot, think about it. They are injecting about 16 times as much med in you as needed. Overall this shot is costing about 10 times as much as it will when micro-needles are available. Under Obamacare there will be many fewer technology advances and products such as micro-needles will likely never be developed.

* Flourinert has been around for about 40 years. It’s none electrical conducting so you can drop entire circuit boards in it. In fact one of it’s first uses was to help cool a Cray Supercomputer (and these always had clear plexi-glass side panels and bubblers in the bottom, purely for effect – very cool).

** Lightly scratch yourself with your fingernail. You may have reached as deep as the stratum corneum.