Time to get myself in trouble again…

Have you kept up with the gulf oil spill? Seen the pictures of oil coating plants and animals in the marsh areas? Read stories of the various clean-up operations? Held your breath at the latest attempt to stop the leak (which fortunately seems to be working!)?

What would you think if BP and the U.S. Government had said that the leak could not be plugged? That there was no way to stop the flow. That best they could do would be to capture some of the oil, perhaps as much as 90%, but the remainder would continue to leak in to the gulf forever. ‘Instead of trying to capture the oil we’re going to put all of our efforts in to clean-up operations and we believe that in any month or year we’ll be able to clean up as much as 10% of the oil that spills during that period and we’ll be able to help 10% of the birds and other animals impacted.’

This is kind of what we’re doing with rescue operations to help enslaved women. All of the focus is on the clean-up and none on stopping it at the source – preventing it from happening in the first place. We save 20 girls, but 400 (4,000?, 40,000?) others are enslaved during the same period*.

The answer, according to many, is that we simply need to end prostitution. Good luck.

In this post Tom Davis talks about ‘Sex divorced from the Love that created it.” This is perhaps a dangerous (and ignorant?) perception. Especially if you want to help girls enslaved into the sex industry. It’s all nice and everything to think about sex and love together, but it’s not reality.

If you ask a woman about sex and love you’ll get a long dissertation on love and romance and maybe a brief mention of sex with the man she loves. If you ask a man you’ll get “I Love Sex.”

For women, sex and love (and emotions) are all intertwined. For men they are pretty much completely separate**. And you know what? This is the way God made us. He made women to desire sex only (or primarily) with the man she loves. He made men to desire, and I mean really really really desire, sex with every cute girl that walks by. And God didn’t stop here, he gave men a nearly unquenchable desire for variety in sex partners.

This is why we have a prostitution industry. Why we’ve had one since the beginning of time. And why we’ll likely have one for at least another year or two. 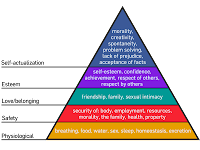 In his 5 level Hierarchy of Human Needs, Abraham Maslow lists sex twice (and it’s the only thing listed twice btw) ***. He includes Physical Sex as a Physiological need at the base of his pyramid along with air, water, food, and sleep. He lists Sexual Intimacy in the 3rd level of Love and Belonging. In discussions on this, more than a few women ask why it’s included on the 1st level. Men know why. However, as intimacy, both male and female can relate.

Many well-meaning Christian men very vocally disagree with me on all of this. Of those who have done so publically, several have later been caught with their hand in the nookie jar.

I don’t know why God made men and women the way he did. Why he didn’t give men a sex drive similar to women. It would have made life in our society much easier. He didn’t though and there’s not much we can really do about it.

At this point I want to interject something. If your husband’s sexual monogamy is important to you and he is sexually monogamous in your marriage – you are extremely blessed! The title of a popular book by Stephen, Fred, and Mike, ‘Every Man’s Battle’, is quite an understatement for many men.

Reality isn’t very romantic, and we ignore it at our own peril.

Do you believe that we can ever eliminate prostitution? Reduce it? If you answer yes to either of these I’ve got some miracle holy water I’d like to send you (for a small donation of course).

So what do we do? With this reality how can we more effectively alleviate women being forced to work as prostitutes, effectively raped, in the first place? Instead of saving 20 after they’ve been enslaved and raped, how can we prevent 200 (or 2,000, or 20,000) from being enslaved or raped at all?

* I am not saying that we shouldn’t be helping women caught in bondage. We should certainly continue these efforts.

** Men do enjoy sex (and air, food, and water) more with a woman they love than with a stranger – but they still very much enjoy them, including sex, otherwise. And ‘very much’ is rather an understatement.

*** Maslow was, to the best of my knowledge, not in any way a believer in any Biblical scriptures and was likely a humanist. This is particularly evident with the top level of his pyramid, Self-actualization. However, his model does accurately portray basic human needs and behavior and does so even for Christians.