Waxman: Reality conflicts with what I expected… 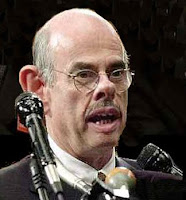 Since ObamaCare was signed in to law a number of companies have begun doing exactly what they said they would be forced to do and what I mentioned, almost 3 weeks ago, they would do (in Theory, Practice, Smoke, and Mirrors). They’re announcing hits on earnings, delaying the hiring of new employees, laying off employees, and reducing benefits.

But, according to Obama’s economists, ObamaCare was supposed to make things better not worse. Why are these companies doing this?

Businesses are getting hit with a number of things, complements of ObamaCare. First up is that providing prescription drug benefits to retirees is no longer tax deductible. This will cost the average Fortune 500 company that chooses to continue this benefit about $112 million per year in extra taxes. This may be chump change to economists playing with numbers in a spreadsheet or Congressfolk spending other people’s money, but it is very real to people running real businesses that need this money to pay employees.

It’s real money that has to come from somewhere. Real businesses can’t simply raise taxes to cover it or change a number in a spreadsheet. They either need to increase the cost of their products (which lowers sales so doesn’t help) or they need to reduce costs which is often best accomplished through reductions in the number of employees or the costs per employee (eg, reduce pay and benefits). Unfortunately other cost savings options either don’t exist or take several years to begin offering any savings.

And Henry Waxman is acting all confused over this. According to Byron York, writing for the Washington Examiner, Waxman sent a letter to CEO’s of several of the companies who have said that ObamaCare will cost them hundreds of millions of dollars and result in reductions in benefits, layoffs, etc. He wants them to come before Congress on April 21st to defend their actions. York wrote:

Waxman’s letter suggests he does not accept the company’s decision. “The new law is designed to expand coverage and bring down costs, so your assertions are a matter of concern,” Waxman wrote to Stephenson, in addition to letters to Verizon CEO Ivan Seidenberg, Caterpillar CEO James Owens, and Deere & Company CEO Samuel Allen. The companies’ decisions, Waxman wrote, “appear to conflict with independent analyses.”

Well, no surprise here that they conflict. And just who did these ‘independent analyses’? Business people who run real businesses that employ people and contribute to our economy?

Does Waxman understand this? Is he or Obamaosi really surprised by the actions these businesses are being forced to take? Interestingly, I don’t think they’re surprised. I fear that what we are seeing was their intention. If businesses can no longer afford to provide healthcare benefits to their employees, where will their employees turn? Why, the government of course. We’re not all socialists now, but just wait a few years.